This game is the one I mentioned several posts ago, here. When I say "pattern sentence" below, I mean the kind of sentences I described in that post. This is a game you can play without doing that method of teaching declensions, too, however.

Grammar-brained students find this laughably easy, although they'll still mix up the vocab order sometimes. I have a handful of students who do poorly with both text and listening, and this really works well for them. They felt very good about themselves, which isn't usually how they feel when we do grammar. Middle range students find it helpful, although somewhat boring because I haven't worked out how to make it competitive.

Purpose
Students practice composing English to Latin sentences with heavy scaffolding. Through this activity, they get a sense for how Latin uses endings to change meaning. The limited vocabulary and fixed syntax makes the importance of endings really clear. Once they're really good at this, you can make sentences that don't follow the exact pattern and reuse the same cards.

Rationale
Is this CI? No. It's not CI because it's not input. I tried to bear in mind the concept of comprehensibility, however, which is why all the heavy scaffolding. This really has no place in a truly "pure" CI classroom. That said...

The fixed syntactical order of the sentence removes the difficulty of figuring out which ending to use. Once the kids figure out that order, all they have to do is decide if a noun is singular or plural. The goal here is not for them to compose sentences by understanding the function of the cases; it's for them to understand the function of the cases by composing sentences.

The English on the back of the vocab cards and the case functions on the back of the ending cards are there for the same reason: this isn't an activity about showing what you've learned already. It's about having all the information and tools ready and waiting, with clear instructions (color, fixed syntax, fixed order, helpful teacher <-- necessary! not a sub plan activity!). If giving a kid a chart and a dictionary is like sending someone to a lumber yard with a picture of a night table and a shopping list, this is like sending someone to IKEA for a night table. It's still possible to make mistakes, but you'll probably end up with something not entirely unlike a table in the end.


Preparation
Materials: index cards, colored pencils or markers
Each card set has at least 10 full size cards and 10 half size cards, plus at least one tiny card for a preposition. So, you will need at least 16 cards per set, and you will probably want at least 5 sets- so let's say 65 cards.

You need five different colors, plus a neutral color for roots, verbs, & prepositions.

You will also need a prepared presentation with sentences & answers. You could just write them on the board, but that's laborious and awful if you're doing this with more than one class.

Playing
Groups: I wouldn't put students in groups larger than 3 or ideally 2.
Set up: each group needs one set of cards. All sets should have the same words.
Procedure:
1. Tell students to spread out their cards on a desk (or two), Latin side up. Help them put the declension endings in order. If your students will need this tip, tell them the endings are always going to go in their declension order. Only the roots & the number will change.
Latin side & English side: 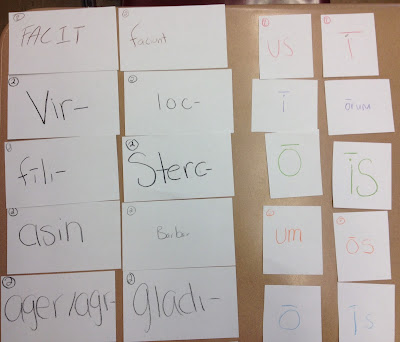 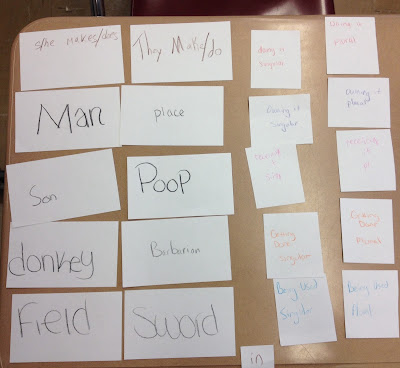 2. Project your sentences before the class. Here are mine for the second declension. Each round, groups should work to match the correct cases to the correct vocab roots to make the English sentence.

For example, the first sentence in that presentation is "The son of the donkey makes a sword for the man in the field" which would come out like this:

3. Once each group has made its attempt & you've gone around and checked, show them the solution and have everyone rearrange their cards into the correct configuration if they haven't already.

How to Win: This part I haven't actually figured out yet. You can do it by which group gets it right fastest, perhaps? I found that I had to run around and help people and it often left the quickest groups waiting for several minutes. I'd be very happy to have your ideas on how to make this an actual game.

Here is the presentation for the second declension. The cards needed are: us/er, ī, ō, um, ō, ī, ōrum, īs, ōs, īs; in; facit, faciunt; fīli-, asin-, gladi-, ager / agr-, vir-, barbar-, loc-, sterc-. NOTA BENE: the order of the English sentences necessarily switches the order of the IDO and the DO, which your students may have some trouble with. You could fix this by making your first & third declension sets also follow the S-V-O-IO order in English, instead of S-V-IO-O.

Salve! I'm Ellie, and I'm new to CI. I started trying to change my teaching in spring 2015 and haven't looked back. I'm very much a rookie, but my goal for this blog is to share my experiences as a new teacher and a new CI teacher specifically. I hope it helps you!