It's a good time to be a Latinist!

Within the last three or so weeks, the number of Latin novellas on the market has more than doubled! 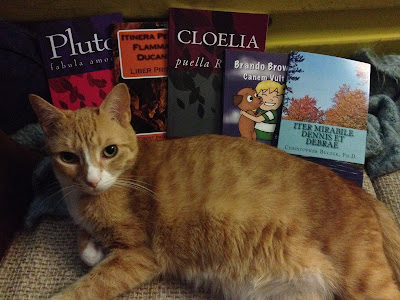 Here is my cat modeling with the titles on offer. What's great about these is that they are, unlike most textbook readings:
1) actually interesting
2) actually readable by first or second year Latin students
3) starring (some) characters who aren't boys

Well, only two have what you can call female protagonists... and only one (Cloelia, full disclosure it's mine) has ONLY a female protagonist and an equal number of named male & female characters, but it's still better than the Latin textbooks out there. There are more coming out soon from Pomegranate Beginnings with female protagonists, too. We're still working on not white, not hetero representation, but this is a good start. I've got something in mind but it's not my next project. If you have an idea for representing a more diverse Rome in text or whatever medium... DO IT. We need it. Latin is for everyone, not just cisgendered, heterosexual, white English upper-class school boys in good enough shape to row for Oxford when they're done at Eton pip pip cheerio. Let's get our textbooks to reflect that.

You can find them here:

Salve! I'm Ellie, and I'm new to CI. I started trying to change my teaching in spring 2015 and haven't looked back. I'm very much a rookie, but my goal for this blog is to share my experiences as a new teacher and a new CI teacher specifically. I hope it helps you!